Linda Hallberg Cosmetics Enchanted Mysteries Eyeshadow Quad ($59.00 for 0.88 oz.) is a limited edition palette that came out in the later part of the holiday season but is still available for purchase. The palette included four shades that could be used dry for a “sheer and delicate look” or used wet to “maximize the payoff and the intensity.”

The “issue” I had was that only Serein was actually sheer applied dry; the other three were quite pigmented applied dry, so I suspect that most will be happy to find that they can be used easily dry and still get coverage/intensity out of them, but it wasn’t in line with the brand’s claim. Otherwise, they applied evenly, blended out well, and had good wear.

We hope you'll consider supporting Temptalia by shopping through our links below. Thanks!
Sephora Beautylish Ulta Nordstrom More
1 of 3
View All
View On One Page

Lakuna is a rich, emerald green with subtle, warm undertones and cooler, emerald green shimmer. It was described as having a shift of “purple, blue and pink,” though I just couldn’t see that much, even desperately looking for it in person. The edge got slightly darker and a smidgen plummy at best, but it read “emerald green” most of the time, including when someone else was looking at me.

It had rich color coverage applied dry as well as wet with the dampened application appearing a bit brighter and more metallic; I definitely didn’t find dry coverage yielded sheerer results, which was how it was described by the brand. This shade stayed on nicely for nine hours before fading noticeably.

Serein is a bright, shimmering white base that shifted from pink to violet and was paired with a sparkling, metallic sheen. It had semi-sheer coverage applied dry and mostly opaque coverage when applied with a dampened brush, which was most apparent when it caught the light (see angled swatch). The texture was smooth, finely-milled, and blendable without having fallout. It lasted well for eight and a half hours before showing signs of fading.

We hope you'll consider supporting Temptalia by shopping through our links below. Thanks!
Sephora Beautylish Ulta Nordstrom More
1 of 2
View All
View On One Page

Void is a medium-dark black with neutral-to-cool undertones and a pearly sheen. It had semi-opaque coverage applied dry and opaque coverage (that appeared a bit darker in color) applied with a dampened brush–again, it was supposed to have a “sheer and delicate” look applied dry but in reality, it was quite pigmented. The texture was soft, smooth, and blendable without being too softly nor too firmly pressed into the pan. It started to look a bit faded after eight and a half hours of wear.

Ara is a light-medium, golden copper with a metallic sheen. The texture was smooth, dense without being stiff, and picked up well with a brush. It applied evenly and blended out easily, and it had a “melted” look after it was initially applied. It had nearly opaque coverage applied with a dry brush and slightly darker, fully opaque coverage with a dampened brush. It wore well for nine hours before fading visibly on me.

We hope you'll consider supporting Temptalia by shopping through our links below. Thanks!
Sephora Beautylish Ulta Nordstrom More
Previous Post
Next Post 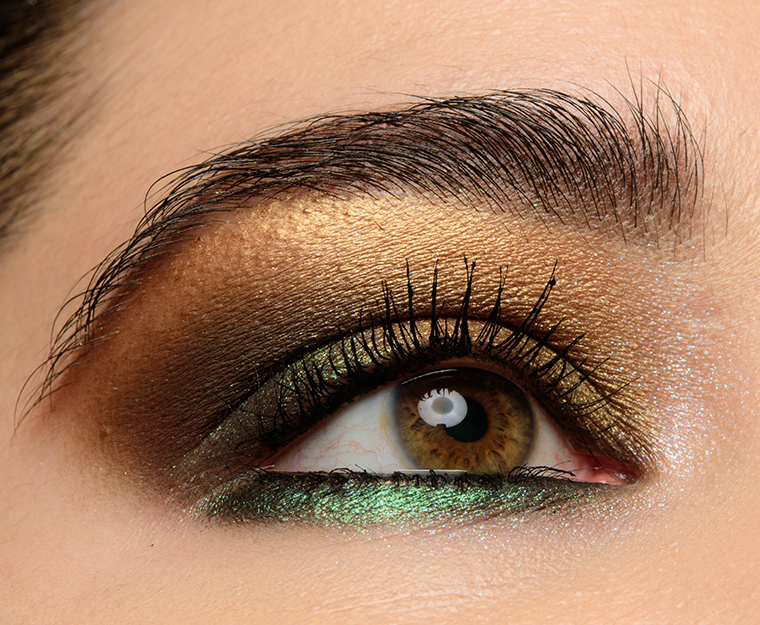 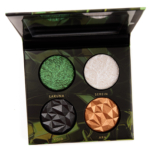 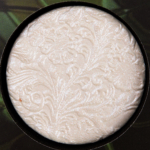 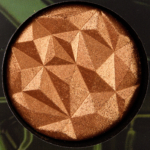 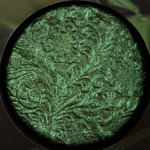 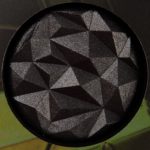 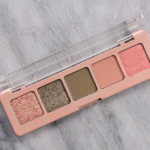 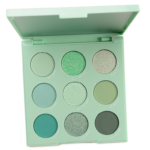 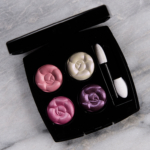 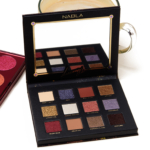 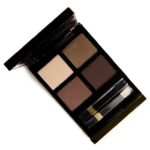 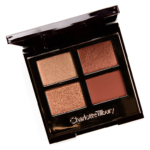 I immediately scrolled down to find out what shimmery emerald green liner you were wearing beneath your lower lash line — it looks so rich that I couldn’t believe it was just eyeshadow!

This is a lovely palette, but — green shadow aside — nothing I can’t dupe with the rest of my collection. It makes me think of a more stark, cold-weather reinterpretation of Empriente du Desert. 🙂

I love Lakuna. I think the shift is more visible in the pan. I use it as an all over the lid shade and I think I can see it a bit from time to time!

LOVE that emerald green! Unfortunately, that’s the only shade unique enough for me to lem after this quad. I do love the other 3 shades, too. But already have ones close enough to those. I just don’t know if this is something I must have.

I am glad to see this get a good review as Linda Hallberg products are rather hit and miss. However, I don’t find this particularly compelling, other than the green shade, of course. I am not even remotely interested.

Glad this scored well ! I ordered this during a 50% off sale on Linda Hallberg’s site.Also ordered the Spectral eye shadow palette.Never used her eye shadows before but love her eye crayons and brushes! Haven’t received it yet but I will be copying this pretty eye look!

I ordered this when they had a 50% off site wide sale a week or two ago. Since it comes from Sweden it takes a while to get here, so hopefully it will be here soon and I can’t wait to use it!

Wow Christine, thanks for so many reviews you’ve been busy!
I love the look of this one m that green!

What an utterly gorgeous quad. I don’t even mind the black, as the pearly sheen gives it a hint of green appearance. I just can’t spend $59 on a quad right now, though.

Linda Hallberg is such an ultra talented makeup artist, with emphasis on the word artist! For those who have not yet discovered her YouTube channel or perhaps even better, her blog where she posts wonderfully playful and creative arty as well as fully wearable looks does have a treat ahead to discover. Being a swede I am of course biased, but I have enjoyed her palettes a lot. This is a bit of a hybrid palette for her among the quads she has yet launched. And I can agree with Christine that I too at first was a bit surprised that the two top shades especially were so pigmented. She has released three quads before and two of them have been with the formula that is pressed like the two bottom shades in this palette and one (which was limited edition) with only the flowery pattern like the top row of this. That palette had the formula that she calls “enchanted secrets” that is a sheerer duochrome almost like topper shades when used dry but gives more intensity when applied wet. Whereas the other formula is called “Metallic mysteries” and is a more pigmented formula already when used dry. (However not as opaque as for instance a coloured raine shadow but more buildable, which all Linda Hallberg products are imo)
I assume the idea of this palette is to combine the two formulas, but I can understand how the temptation to make the green shade, (which judged from the pressed pattern on it was supposed to resemble the enchanted formula), stunningly opaque and shiny. And I am personally glad that Linda and her team dared to go there instead of staying formalistically true to the formula description of the old palette. In the Swedish description of this palette it is not described as sheer vs opaque in context of dry vs wet. Instead they here emphasise on the duochrome vs the metallic finishes. But that you can maximise the intensity of them all using them wet. So it could also be a bit of a language issue, I guess that it is translated to sheer vs intense, when Linda could very well have just wanted to make sure users know you can use the product wet and dry with different effects – which is more true to how this palette works. It is also a bit of a cultural thing. Descriptions delivered by an artist here is not taken as much at face value where you sort of promise something, but instead more to give an idea of what to loosely expect, whereas descriptions in the US seem more interpreted as a true promise which more or less is a deal breaker or a fault if people don’t agree that the product lives up to its promises…?
Linda has already used this palette in numerous different looks and judging from that at least she has been able get both sheer as well as opaque results from all of these shades, but then you of course have to take into consideration that she also is a very talented makeup artist… who knows how to make the most of a formula from an application point of view. She also likes to teach such techniques. That is also the most common critique she gets for her larger palettes that are made to be used not just for the eyes, that they seem sheer when swatched. But they are made to be buildable and used in versatile ways to offer the most creativity possibilities to the user.

Anyhow it is great that her little indie brand is getting so much attention that you even can find it among all the super brands that Temptalia reviews! That warms the heart of a fellow swede from the little country in the north of Europe… 🙂

I love the green and gold shades, but the inclusion of the black and white shades makes it a deal breaker for me. The white shade doesn’t really fit into the colour story of a four pan and the black shade is too dark – a steel grey would have been better…
Stunning eye look Christine.

Well, it was in time for St. Patrick’s Day, and later Halloween, and hazel, baby brown or green eyes AND any evening events, but I don’t see doing the later nor wearing these during the day, no matter that I think the green is lovely. 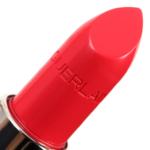 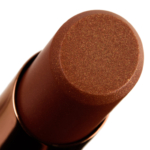 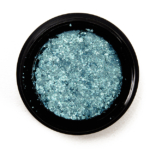 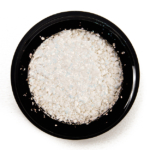 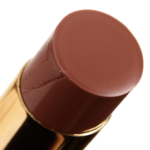 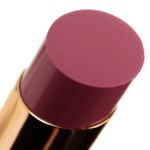