Marc Jacobs Beauty Frivoluxe Eye-Conic Eyeshadow Palette ($49.00 for 0. oz.) features an assortment of pale peach, mauve, violet, purple, and taupe. I think the color combination was rather unique relative to most palettes, so I really was quite disappointed by its performance, though I was not entirely surprised, given grays and purples are often hard to do well. The palette was workable but lacked pigmentation in some shades with inconsistent textures with one being exceptionally stiff and others being smooth and silky. 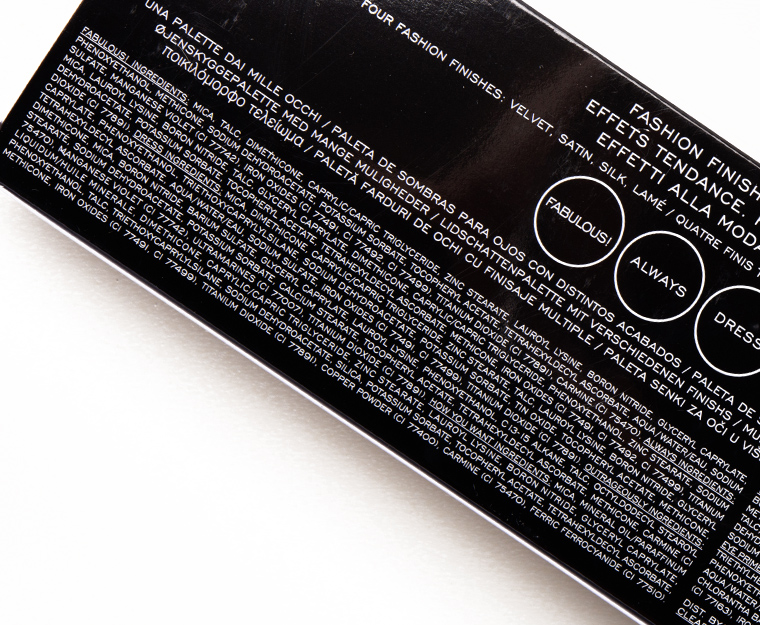 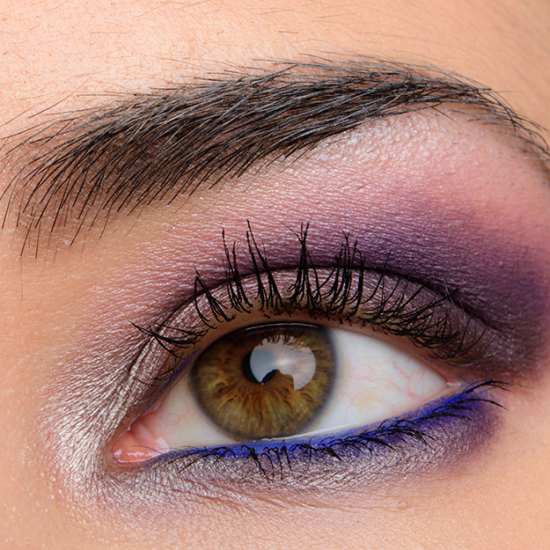 Fabulous! is a very light, whitish peach with subtle, warm undertones and a pearly sheen. It had semi-sheer, buildable pigmentation (up to semi-opaque coverage) with a smooth consistency that was a touch powdery in the pan. The color lasted for seven and a half hours on me.

Always is a light pink with warm undertones and a satin finish. There were larger sparkles in the pan but none transferred when I swatched. The texture was very firm and stiff in the pan, which made it difficult to pickup product with my brush as well as for applying and blending out the color. It did not apply evenly and darkened as it absorbed the natural oils on my skin. It lasted for six hours or less–it was hard to tell.

Dress is a muted, medium-dark plum with warm undertones and a frosted finish. It had rich pigmentation that applied well to bare skin. The eyeshadow felt soft, silky, and smooth in the pan and blended out with ease. This shade wore well for eight hours on me.

Outrageously is a medium-dark violet purple with cooler undertones and barely-there sparkle. It had medium coverage, which was difficult to build up without a primer or white base underneath it. The texture was soft, slightly dusty, and thin, which made it harder to apply evenly to the skin. It started to fade noticeably after seven hours of wear.

How You Want is a blackened purple with warm undertones and a satin sheen. It had opaque color payoff in a single layer, and the texture was fairly soft–a smidgen dry if anything–and was blendable on the lid. The color wore well for seven and a half hours on me.

Who Has Time is a dirty, brownish pewter with a metallic sheen. The color was more complex and almmost like duochrome–like a brown base with green-to-gold shift–but so much lighter and cooler on top. The texture was smooth, silky, and easy to work with, and the color payoff was opaque. It lasted for seven and a half hours before fading on me.

For Less is a medium, bluish gray with cool undertones and a matte finish. It had semi-sheer pigmentation that was buildable to medium coverage, but the thin, dusty texture made it prone to sheering out on any drier surface or else prone to absorbing natural oils on more emollient surfaces. It wore well for six hours before fading noticeably on me. 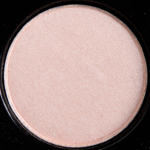 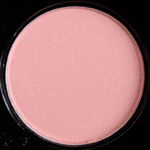 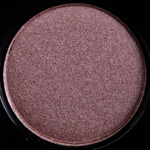 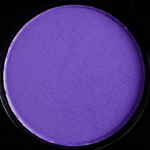 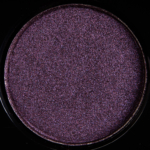 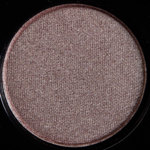 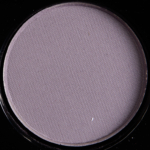 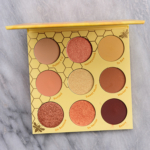 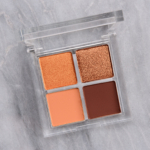 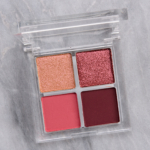 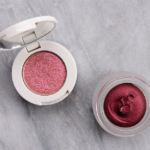 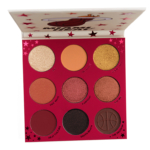 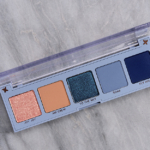 Oh my. Sad. Much as I adored the color concept, not willing to go there, with the abysmal review.

Bummer, this officially went off my possible to get list. I really like the portability of this palette though..and also the simplicity of it.

P.S. Is there a purple-y palette that impressed you? Thanks in advance.

I think Viseart’s Cool Mattes or the Amethyst comes closest though not super purple!

I wish it was better!!

Bad purples are the bane of my existence. I’m glad I didn’t get this, as it had seriously tempted me.

There are so many, too 🙁

Oh wow, disappointing! If memory serves most of his eyeshadows overall do well. Oooooo speaking of MJB eyeshadow! – Did you see there is a new 20 pan coming out some time this month? I can’t find any other info on it other than a picture online. It has tiger (maybe zebra) stripes. 🙂

It’s like Marc Jacobs is reading my email. I just got a notification and the palette is on his website now, along with some other animal print makeup. 🙂

Yes, I did see that – it’s on the brand’s website!

Talk about a mixed bag! Although 5 out of 7 shades are quite good, I will shop my stash instead, I think. Got dupes? Yuppers!

It was, haha! I wish it was consistent.

I purchased this palette after seeing your eye look and I have been loving it. For me, some of the shades need special prep to get the best from them but I have still been able to get some really lovely eye looks. So interesting how there can be such a difference in shades within the same palette. The purples work pretty well for me but the lighter shades are difficult to work with as they are so light in color and pigmentation that they don’t show up well and that is on my super pale, white skin. Overall, I am enjoying it.

I’m happy to hear that it’s working well for you so far! What prep are you using?

Goodness! Not what I was expecting. Everyone on Youtube is raving that the reformulation is some of the best shadows they’ve ever used. Hopefully the others score better.

Some of them are nice, but I don’t know if I’d say best ever!

Wow. This was the only one I was actually considering. Thanks for your review. This will now be an easy pass for me.

Thanks again, Christina, for saving me money!!! I was considering purchasing this palette this morning. Now it’s an easy pass.
Will you be reviewing the other palettes in this release? Now I’m looking at Provocouture, but I want to wait for your review.
Thanks for all of your great work!!!

I already reviewed all of the palettes – this one did not stock with the others, so I couldn’t buy it immediately – that’s why this review is so late!

How sad. I was really looking forward to this palette because of the look you put together. I’ll stick to some of the better performing dupes.

I hope you have some of the dupes!

It’s funny, because a few of the new MJ palettes seem like he expanded on the idea of some of the 3-colour palettes he had. This one in particular reminded me of “The Punk”. Since I already have that one, I don’t really feel compelled to add this one, especially in light of your review.

I see exactly what you mean by that!

This definitely is a mixed bag. I am surprised that For Less scored an A- because it looks so dry and dusty in the swatch.
The only shade I liked was Who Has Time – very pretty. The rest of the palette yo yoed in terms of quality, but the deeper purple shades were lovely.
Beautiful eye look Christine.

Dress and Who has Time are both really pretty! Wish all the shades were like those!

Aww man this was the one I was most excited about. Sorry it didn’t perform well. A good purple /gray eye shadow palette would have been a good way for me to sample Marc Jacobs eye shadows. As I’ve had yet to try them.

Me too, Denise! I was worried (purples!), and I was right to be worried!

Dress and who has time are so nice!

So sad , I had my eye on that one. Thank god I didn’t buy it. Yeah there were a few swatches that did not look like I thought. I want to find a palette that does not have all the reds/ orange/ peach colors, looking for something different.
My runner up was the pink / rosy palette from Marc Jacobs, I forgot the name.
But I really like the Highlighter eye liners. Especially the purple watch matching Mascara and Teal one.
Thank you for reviewing & saving me $50.00.

Uh, I think there’s a typo in one of the scores….. For Less got an A- , but it’s semi sheer and prone to sheering out (but got a 10 for pigment) and faded noticeably after 6 hours (but got an 8 for longevity)

No problem Christine! This was the kit I was most interested in, saved me $ 49, thank you !

Love the cool colour combos – shame about the quality 🙁

Oh, drat! The colors are so beautiful I wanted this palette to get a better mark!

I bought this.. because.. I thought the palette was well edited colour wise not to look like everything else. I haven’t had problems with performance, but lately I’m wearing very simple looks.. one and dones with a bit of emphasis on outer corner and a bit of my blush colour in crease to push back hoods. Finger swipes work and then I diffuse with soft brush. I haven’t touched the shade Outrageously yet. I like the palette..pretty much bought it for the shimmer shades and the cool blue/grey colour ‘For Less’. 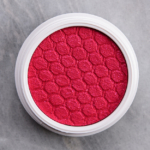 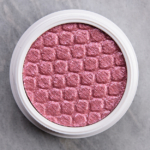 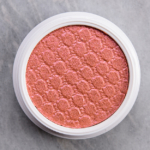 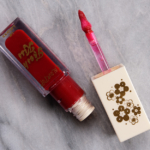 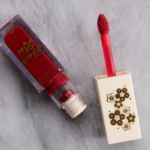 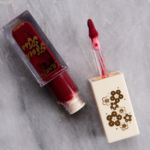