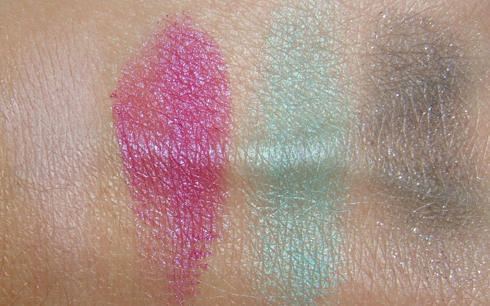 Too Dolly Palette swatches and product photos for you! 🙂 Now, to focus on and study for Managerial Accounting and research and figure out my topic for my 30-page law paper! I really wish I didn’t have school to contend with on a daily basis.

Some Notes: Stately Black is different than Stately Black released prior; it’s pretty much a lustre-ish, gritty dark gray shadow with silver flecks. At least, the original Stately Black was an intense gold-flecked black. All of the four shadows felt a little chalky to me–even Romping–and Too Dolly reminds me of Meadowland eyeshadow from Madame B. circa 2006 (I think).

Very pretty. That Stately Black looks a lot different than the swatch you posted earlier, it looks like it has a blue tint and blue shimmer instead of gold. I like it better. Is Too Dolly similar to Wisteria? I’m not sure if I like Yogurt yet.

OMG, I know, right? I’d rather them repromote the original version than reuse the name but toss out the color! It’s just very confusing :/

I actually think they coulda come up with better colors for the Too Dolly palette. Maybe Romping and Too Dolly, then a light purple color, similar to Idol Eyes and a light green color, similar to Urban Decay’s Absinthe, but with light blue shimmer instead of gold. I also think they shoulda had blue, purple and green glitter eyeliners, a light blue pigment (like Aire De Blu). But then I probably would have been really screwed, cause I would have had to spend a few hundred dollars on all the stuff. I love pastel type colors.

Thanks for posting this Christine. I really like the look of this palette, esp the middle two colours, so might get it when it comesmy way sometime next month I’m guessing.

Thanks for posting…which do you prefer Too Dolly or Lucky Tom?

To be honest, neither :/ I don’t like either very much, and there are so many repromotes. I think it depends on what you feel you use a lot or what you don’t have enough of.

hang in there homie…it will be all over soon and u’ll have that big degree to show for it!! YAY! then u can buy all the makeup in the world from the big bucks!! hehe

Originally I wanted the e/s palette Lucky Tom but both palettes look too chalky to me. It’s always my problem with MAC’s e/s palettes. I don’t know… They seem to be of different quality than the singles. I will save myself the $$ and put it on more l/g and l/s.

They are chalky–not feeling either palette, and I was disappointed with the quality overall.

Wow…that Stately Black is just…horrible. Glad I got the first version.

OMG, tell me about it! UGH!

Is too dolly similair to the heatherette 2 blue color?

If Two Dolly really IS similiar to Meadowland than it’s going to be way more green (think a frosty light teal) than 2 Blue.

It’s not exactly like Meadowland, but they’re in the same family I’d say.

I’d say it’s similar, not exact, but it’s in the realm. I don’t have anything from Heatherette, so I can’t compare in person ;/

that doesnt look like the yogurt i have at home, it looks pinker.

not getting any HK though, spent too much money already.

Just swatched it straight from the palette, I swear it!

Hrm, I’m not sold. The only one I really like swatched is Romping and while I like looking at it, I don’t think I would wear it. Still, I am a HK fanatic, so I can’t wait to see what else there is!

You could substitute Plum Dressing or Hepcat for Romping (maybe mix a little Stars ‘n Rockets with them) for it, too.

Yogurt is a really matte color, goes well on the inner lid with SKETCH on the outer part of lid. And I was bummed I missed Romping in the C SHOCK so I think I’m gonna get this and the other palette and def want a lip conditioner! 🙂

Have fun with this palette, Manda! Hope you find some awesome combos.

Romping looks gorgeous, and that’s about it in this palette. I have no idea what I would do with it though.

Christine, would you use it as eyeliner? Considering it’s bright pink? And also, what do you think of the quality of the palette e/s in LE vs. singles?

I don’t think I’d use it as an eyeliner, just because it is a little too pink for me. I might overlay it with a purple, though, for some cool duo tones 🙂

Singles were way better. Romping when it came out in its own pot was much nicer!

Hey, Christine, when you swatch do you use a primer as a base? I’m wondering if the Stately Black would apply better over a primer because I actually really like the steely grey of this version.

And I totally have Meadowland – it is SO one of my all-time faves. This looks about a shade and a half darker but it’s definitely the same color family. I think it’s the difference between, say, Aquadesiac and something like Steamy.

Romping looks really familiar. Was it part of C-Shock?

Romping did come out in C-Shock 🙂

I love the colour of Romping – I will be picking the e/s it up.

Ugh I wish I could see a swatch of Too Dolly against Moodring from Heatherette! If they’re similar enough I think I’ll just get hepcat and call it a day on that… stately black seems like nothing special. I do love the looks of romping, but not enough to pay 40 bucks for it.

I wish I could do it, but I don’t have Moodring 🙁 Hepcat, Plum Dressing… very similar. If you mix Plum Dressing with Stars ‘n Rockets, you’ll get quite close to Romping.

Stately Black kind of reminds me of Pandemonium eyeshadow from the Naughty Nauticals collection.

OMG!! AMAZING!! Btw, I’ll start syaing Hi :] Im pretty new in this, to be honest, I didnt know bout Hello kitty makeup collection, I would like to know where I can buy those stuffs, so … xD … I know kinda weird but yeah! if some1 can tell me, I wl be really happy haha! K thnx ^^ 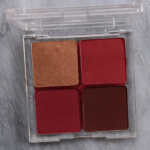 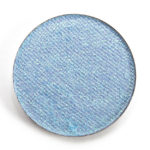 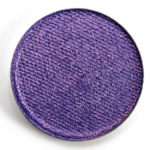 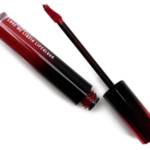 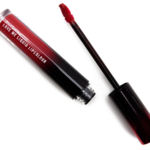 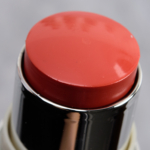