Natasha Denona Gold Glow Highlight Duo ($42.00 for 0.5 oz.) is for someone who loves warm, gold highlighter and never feels like their highlighter has enough glitter in it. The Diamond Powder is a more sparkly formula, and that particular shade is described “sparkling,” though I’d say it’s teetering on the side of full-on glitter, while the Super Glow formula is more finely-milled with a shiny sheen but less overt sparkle… but it, too, had a good amount of sparkle and micro-glitter.

If you’re not into glitter, give this a total miss, and for those who do like glitter, the texture of both shades was difficult to work with as they were so dense that they were stiff and did not pick up well with a brush (even denser brushes). I really had to jab my brush and push it against the powder’s surface and then felt like it required enough buffing that lifting your base products would be a real concern. 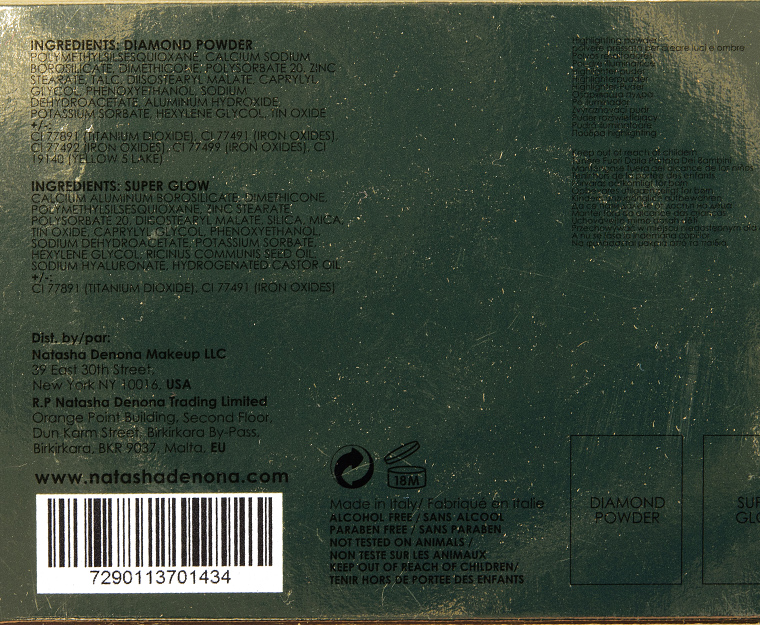 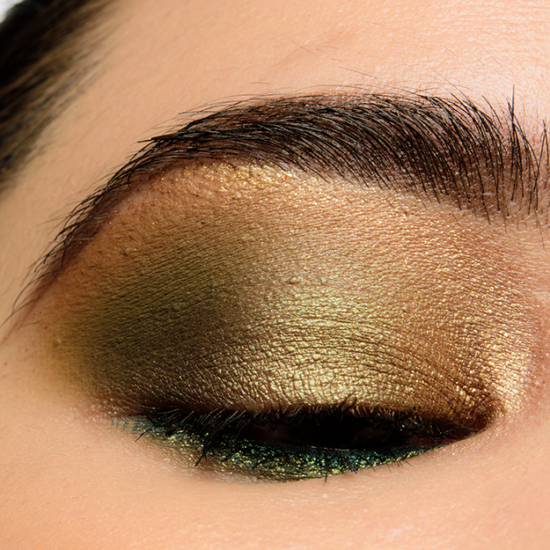 Gold Glow (Left) is a medium gold with strong, warm undertones and a glittering, gold finish. It had medium coverage that built up to semi-opaque coverage but really required a heavy handed approach in order to pick up product from the pan, due to it being so firmly-pressed.

I think the coverage and finish were in line with past shades released in the formula, but the texture was much firmer and drier, which made it more difficult to use. I felt like a a fair amount of the sparkle got trapped in my brush, so the finish wasn’t quite as glittery applied to my cheeks as it initially appeared. When I blended out the product, it didn’t blend out as evenly as I expected, and over foundation, it was more prone to moving it around. On me, this shade lasted well for eight hours but some sparkle had traveled over time.

Gold Glow (Right) is a light-medium, golden copper with warm undertones and a glittering finish. It had semi-opaque pigmentation but steadily yielded sheerer and sheerer coverage with subsequent usage as the surface was prone to hardening (typically occurs from the natural oils that can transfer between cheek and brush or fingertips and skin!).

It had developed significant hard-pan within two uses (which encompassed applying once my arm and once on my cheeks), so the third time I used it (which is the time I apply for actual testing for the review), it had sheer coverage and I had to scrape at the surface to get enough product to release to apply it to replicate the result I had in my initial face swatches.

The texture was incredibly dense, stiff, and hard to pick up with a brush; I had to jab and push my brush against the surface in order to get product to come off. I felt like the drier texture was reflected on my cheeks as it was uneven and patchy in places, even when I tried to buff it into place. On top of foundation, it lifted up my base and made my foundation look patchy/cake-like. This shade stayed on well for eight hours before fading, but there was some glitter that had migrated over time.

The formula is supposed to be a "super-soft powder" that "mimics skin's natural texture for a slick, seamless finish that won't settle in fine lines" while creating a "multidimensional glow" and "glass-like sheen." The powder has a denser consistency with slight slip and creaminess, but it definitely feels like a powder.

The three shades available had semi-opaque to opaque coverage in a single layer with a strong, metallic sheen and a lot of shine--more reflective and shiny than shimmer in texture, but it was a mega-watt kind of glow. It worked well with standard, tapered highlighting brushes without having to use a light or heavy hand with it. The highlighters applied evenly, blended out easily, and lasted for eight to nine hours on me.

Browse all of our Natasha Denona Super Glow Highlighter swatches. 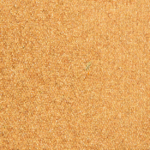 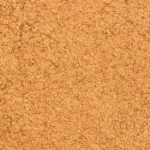 Read Review
F
Featured Retailers
We earn commission on sales tracked from links/codes. Thanks for your support!
Sephora
Beautylish
Selfridges
Cult Beauty
We hope you'll consider supporting Temptalia by shopping through our links below. Thanks!
SephoraBeautylishUltaNordstrom More
About Reviewer
Review FAQ 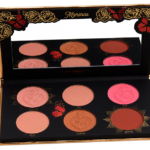 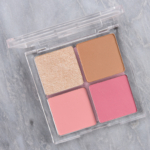 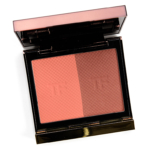 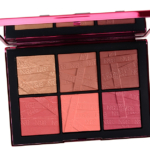 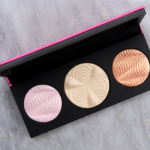 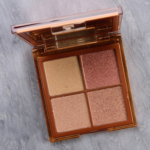 I feel like these kinds of sparkling, glittery highlights apply best with fingers. It’s so bizarre that the right shade is such a horrid dud- I love her other highlighters and I wonder what went wrong! I hope she fixes it for the next time she releases face powder products.

Evidently these are supposed to be applied with fingers, preferably over a cream base…

ND’s website just says to apply directly on foundation, cream highlighter, or bare skin or to use a damp highlighting brush – doesn’t actually specify fingertips under “how to.”

I’d be very careful using fingertips with the formula because it will harden much faster with continued fingertip usage!

I heard Natasha used fingers during a SEPHORiA demo from a trusted YouTuber. But she uses a brush on her instagram page…
Somewhere in a comments section someone noted that tape can be used to remove hardpan but I haven’t tried it yet… thanks for the heads up!

You can also take the back of a brush and scrape it off or use a paper towel (rough enough) to rub off the hard pan as well!

My Tom Ford Terra bronzer hard panned (I wonder if certain textures eg gelee or high glitter are more prone? Probably anything I keep having to use my fingers with). Also, my Natasha Denona toppers hardpanned. I’ll try the paper towel trick and report back. The scotch tape idea did seem a bit… much.

I find silicone-heavy powder formulas can develop hard pan quickly – possibly a combo between reaction to added oils but also how dense/thick/firm they can be to begin with. More matte finishes also can react more strongly to natural oils, so a matte eyeshadow used with fingertips a lot can get hard pan easily!

how disappointing! I love the diamond powder formula in ND blush palettes. thanks for the review <3

Is it wrong that I am happy this got such a bad rating? Now I am absolutely no longer tempted by it.

heehee, I’m actually sad about the bad review for the same reason! over and over, my HG products are things Christine has been unimpressed with and vice-versa. And I thought this looked awful in person. But now I’m intrigued! There’s a pretty good chance I’ll end up wearing this all Fall and Winter. *sigh*

Goodness. Ouch! And I was totally eyeing this. I’ll stick with MAC. You can’t go wrong with Whisper of Gilt.

Not often does a Natasha Denona product fail, but, boy oh boy, I have yet to hear anyone rave about this cheek duo! It really IS that awful. The glitter topper shade isn’t so terrible, but that second shade is abysmal.

I’ve never noticed them before (are they new, or am I unobservant?), but I LOVE your earrings–can you tell me about them? Thanks!

They’re from Betsey Johnson – “Snake Front and Back” earrings – they’re pretty neat because they come with two backs so you can wear the head and tail of the snake together (so it looks like it’s woven through your ear… delightful imagery!) or just the head, lol! They’re at Macy’s.

Your earrings are beautiful. Your HLs…or these NDs, not so much!

This was only on my radar as a potential gift for my daughter whose skin tone is maybe one shade darker than you, Christine. I don’t find this shade to be particularly attractive regardless of performance. Now that I have seen it on your skin and swatched it just doesn’t appeal. Something about what little base that is there, doesn’t seem very “pretty” for lack of a better descriptive. I am so okay with it not performing well but as usual, I wish it was better for those that like ND and like this shade.

Wow, was not expecting this from ND.

To be honest, this didn’t look so great when I first saw it – it’s more like what an eyeshadow duo would be. Not surprised with all that glitter. You seemed to have persevered with it more than most would have Christine.

I ALMOST got this. After I saw your swatches I decided to wait. So glad I did!

All I can say is I’m shocked!

Does this remind you at all of the Fenty Beauty Diamond Veil highlighter formula (the original)? Because if it does, this actually might be right up my alley, I love a baseless glittery highlighter. 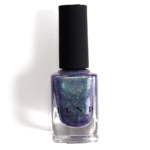 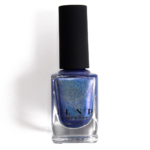 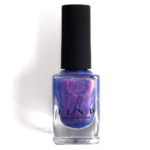 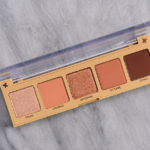 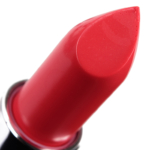 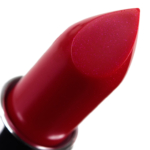