ColourPop Instant Crush Cheek Dew Serum Blush ($7.00 for 0.48 oz.) is a muted, medium brown with subtle, warm reddish undertones and a soft sheen. It had sheer color coverage, which I didn’t find to be that buildable (as it was intended to be). It was an achievement just to get sheer coverage as the formula was so emollient and slippery that the product just wanted to slide around rather than adhere or layer up.

The texture was very runny and fluid, so I tried squeezing out product on the back of my hand and then picking up product from there, including swirling my brush in it to help dry the product out prior to applying it to my cheeks. These little things led to marginal improvement, but it still was difficult to apply evenly. I felt like I had one shot–the first shot–to get it mostly even and then had to leave it. Whenever I tried to blend out the edges, the product slid around or lifted away.

This occurred over bare skin as well as over foundation; the latter felt particularly difficult. I actually had some luck when I patted it over set foundation as the powder finish seemed to absorb some of the slip and helped the color adhere better. The formula dried down somewhat, so it retained some dewiness and was never tacky, but it did not fully dry down (which is not a pro nor a con). The color that translated seemed to fade around the six-hour mark.

The formula is supposed to have "buildable coverage" with a "hint" of dewiness that can be applied with fingertips, sponge, or a duo fiber brush and is recommended to be applied prior to powder products. I struggled to apply the formula, and I tried using fingertips, sponges, and various brushes both over foundation, under foundation, over bare skin, and even over powder (which is the opposite of what they say to do!).

For me, it seemed like the issue was that there was way too much slip in the product, so instead of applying and blending out, the color just pushed around. It had the worst application when I used fingertips to apply, which I'd apply by patting and pressing the color (gently!) onto my cheeks and using the edge of my fingertip to soften. This is my go-to method with cream-based cheek colors, and it usually works, but I couldn't get the color to stay and place.

I tried using a sponge, but the sponge seemed to absorb a lot of the color that it made it hard to get detectable coverage out of it. I found a stippling brush to work better, and I gently flicked the brush against my cheeks to deposit color, waited 10 seconds, and then tried to diffuse and even out the color. This worked somewhat and sometimes, but it did not always work, unfortunately, and when it didn't, there was almost no visible color.

Since it seemed overly emollient, for the majority of my application attempts, I squeezed out product on the back of my hand, so I could swirl or pick up product as it had dried out a little bit, but this did not help much! The "best" method I found was to gently dab the product onto my cheeks using fingertips, let it sit for five to 10 seconds, then use a synthetic brush to soften the edges with the gentlest touch and only do each area once, and then leave it alone and accept whatever the outcome was.

It did not play well with the various base products I tried--a mix of liquid foundations and tinted moisturizers, both set and unset--as it was prone to sliding them around or lifting them up. They were better over bare skin, but they were a real challenge to work with. They were also not buildable in my experience as this resulted in the first layer moving around and lifting away from the main area and leaving a raised edge of product.

The consistency was very fluid to the point where it felt runny; it would slide down the back of my hand with the aid of gravity and do so quickly. It took awhile to dry down, and it was somewhat movable with light dewiness in its finish but wasn't tacky. They lasted around six hours on me before fading visibly.

Browse all of our ColourPop Cheek Dew Serum Blush swatches. 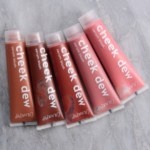 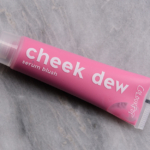 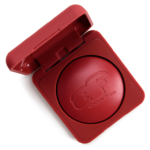 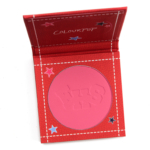 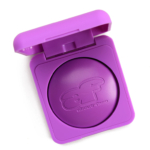 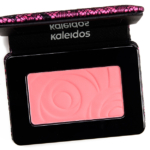 Yikes! I can’t believe how low Colourpop has fallen this year. They used to be one of my go-to brands, but I don’t think I’ve bought anything from them in more than a year. I’ll continue to be wary about purchasing from them, as it seems their quality took a sudden and steep nosedive. Products like this only reinforce that belief.

aslkdjfphqelkjr when I first saw these I wanted to comment “just bring shades back from/expand the super shock collection!” but thought I’d see how these do

Welp …Colour Pop can only go up from there:)
I’m always amazed how Christine can make these sub performers work for her …I know that’s skill and not the product.

Good grief; I can only just imagine someone living in our climate who has long hair wearing this on a windy day! To be honest, I had a feeling these would be a greasy mess just going off the swatches.

Oh man!! I have 2 of these shipping in. I hope I can find a way to make them work.

I purchased this exact one last week and its on its way. Maybe I can mix it with something just to get my use out of it.

I didn’t expect to see you here! I love your YT channel. 🙂

This is sad. Bring back the full lines of blush stix and the light stix instead! But no … why do that when you can pump out product under the hype of “new” even though it doesn’t perform? …

I love blush stix, the fact that Colourpop doesn’t restock them hurts my soul 🙁

I was super excited for these but waiting for your review… crossing my fingers that the other colors will be better! The last thing I want is a liquid product that can’t apply correctly over foundation.

Wow. Not a very nice day. Not sure I’ve ever seen a day so saturated with poorly performing products. These CPs had me leery anyway, but yikes. March 8 = epic fail day. Things can only get better from here.

Well I’m certainly glad that I didn’t order one of these! Even in the promotional videos I thought they looked a bit odd but I was willing to give it a chance… I don’t understand how a formula like this makes it past product testing!

I don’t know if I’m alone in this but I wish that you would show us photos of just how bad it looked on you because in the photos above on your face, this stuff looks lovely rather than “slidey” or “lifty”. Without reading your comments, I could imagine a lot of people might think “that’s gorgeous; gotta get me some of that…”

It is patchy in the photos above, actually!

“Neither a pro nor a con” sent me

Hey, Christine–
I hope I’m not too late to ask. I waited around to see if I could find this face/eye look on your page (you said with some others that you put them there ‘for reference for yourself’, but I use them, too!), but I don’t see this one. Do you have eyeshadow on your lids here, or some kind of iridescent powder, or is my screen playing tricks on me? My favorite easy-eye look is a skin-colored iridescent shadow, usually cream, with or without a bit of color to highlight the crease, and liner and mascara.

And what I see on my screen is the most gorgeous play of color on your lids. Almost like UD Solstice or CP Frog or Glass Bull. Can you remember what you did here, or are these your bare lids (lucky you)?

Thanks, as always,
Emily

It’s not a shade that is available yet – it is a shade I’m working on, so it’s not something I have in the database!

It is similar to Sydney Grace’s The Greatest Gift, but my version is on steroids 🙂

LITERALLY my dream color idea… I’m the one who buys Tarte Wild at Heart or Colourpop Mr. Sandman or Touch in Sol Holo Mulberry and loves them, but wishes they were just a little… more!! What a GREAT concept; I can’t wait to see how it comes out! 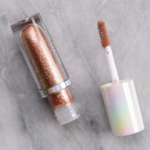 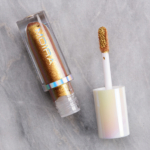 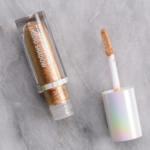 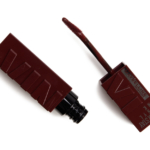 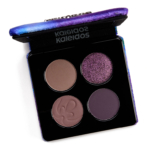 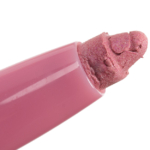