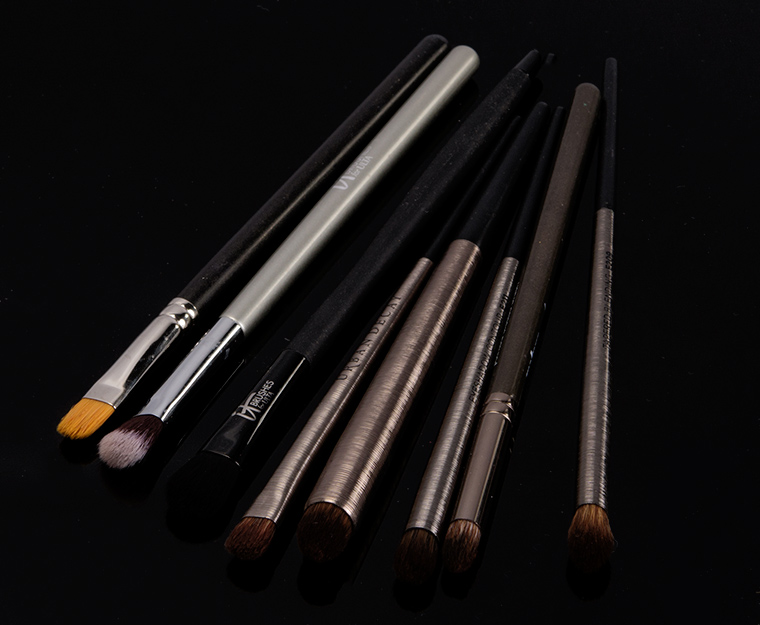 When it comes to applying cream eyeshadow, synthetic brushes are my go-to as creams as natural hair brushes can soak up liquid and creams too much and produce either sheer or streaky results (and creams tend to necessitate washing often, and synthetics can take the extra washing easily).  I find a flat, synthetic brush is necessary for all-over lid application; a fluffy, dome-shaped brush key for diffusing crease color and applying creams to the brow bone; and a dome-shaped, denser brush for depositing pigmented color into the crease.

I would love to hear about the brushes you can’t live without for applying cream eyeshadow — share your picks in the comments! 🙂

Applying Cream Eyeshadow to the Lid

When I’m using a cream eyeshadow on my lid, I consider whether I’m laying down a sheer wash of color (or that I’m applying it as a base for powder eyeshadow) or using it as a standalone lid shade.  Typically, for the latter, I’ll reach for a flat, synthetic brush, which will pickup product well, apply and pack the color on without diffusing the edges or reducing the intensity much.  For a sheer wash of color, a fluffier, dense, synthetic brush will work best for picking up a moderate amount of product but giving an airier application that makes for a good one-and-done all-over wash of color. 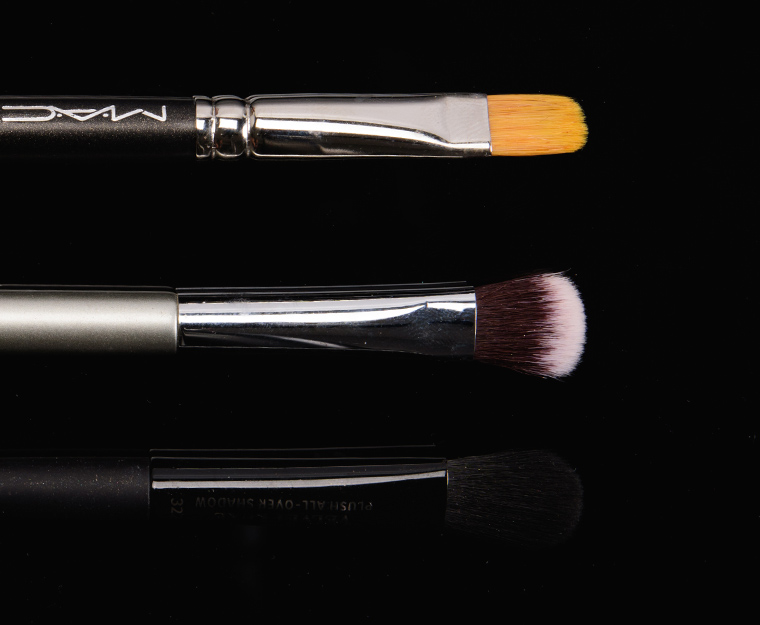 I’ve found that working with cream eyeshadows in the crease can be a little trickier, so I tend to apply as a two-step process with one brush to apply the color more precisely into the crease area with fuller coverage and then using a different, fluffier brush to diffuse and pull the color outward as necessary to get a subtle gradient.  For working with color above the crease and on the brow bone, I use the same, fluffier, dome-shaped brush that I use for blending in those areas. 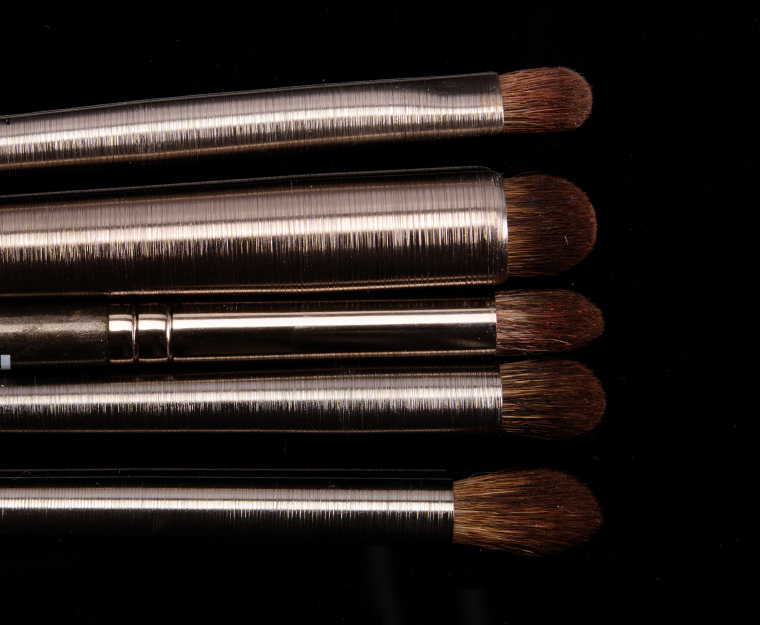 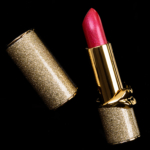 This or That: Sparkly Red Lipstick ft. Pat McGrath vs. UOMA Beauty 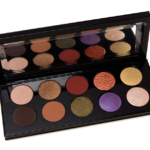 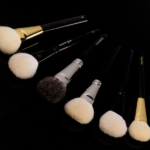 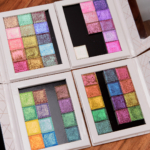 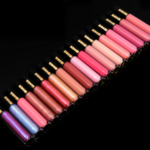 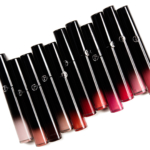 Once again Christine, explaining about the different brushes and the best technique for applying cream eyeshadow really does help. Thank you so much.

I own eye brushes from UD, IT Cosmetics, and MAC but my most used brush is the $3 ELF C brush. I love that thing and own several and ive never had any issues with shedding or falling apart even though I use them everyday and wash them every week. Writing this comment makes me want to pick up another one. I could never have enough. My second favorite would be the IT Cosmetics eye brushes…but they’re a distant second.

Thanks for the rec, Jess!

For my budget, I really like e.l.f.’s brushes (especially the studio line) as well! They are not impeccable masterpieces of craftsmanship like a handmade Japanese brush…but they get the job done.

Obviously, I snoozed on yesterday’s brush post! But as for my favorite brushes for cream shadows, I absolutely love the ones I got from ColourPop! A few fluffy dome brushes that allow me to buff and blend crease and transition shades, plus a few flat shades of theirs that work almost as well as my fingertip. Although, in all honesty, I much prefer using my ring finger for lid application, and my pinky for inner corner highlight.

Ooh, good to hear that the ColourPop brushes work well for you!

it’s been a while since i’ve been to colour pop’s web site as i have lots of their products. didn’t know they sold brushes. thanks for the info. will go take a look at them.

I don’t use/like brushes for cream shadow application. IMO, they need to be warmed up to apply well, which i think is why many people don’t like cream shadows much. I use fingers and blend with an old-school wedge sponge if absolutely necessary. It’s fast, looks great, and all you have to wash are your hands.

Glad that method works for you!

I don’t wear a lot of cream shadows as my eyelids are so oily. But this info from you Christine is so interesting, I’m learning a lot and filing it away to use in the future. Thank you! I have a full set of Wayne Goss’s brushes and a full set of Rae Morris’s brushes which are natural hair brushes, but I also have some synthetic Sigma brushes that would work for cream shadows.

That is a great brush collection, Brenda!

Thank you so very much. Cream shadows have been a dilemma for me. This information really helps.

Christine, I love the Chanel illusion D’ombres in Melody and wear it almost everyday. It’s that weird hybrid between cream and powder.
I’ve been using my fingers but sometimes that’s not the best, any recommendations for that type of formula?
Thanks!

I would use any of these brushes with that since it is a cream eyeshadow! Which section is really more about how you want to the product to apply/look – e.g. sheerer or more opaque etc.

Great write-ups of the brushes, Christine (both articles)! I think you provide really useful information.

Thanks for publishing these great brush tips.

Glad I could help!

Kudos to you Christine!!!! Great information on which brushes help to create beautiful makeup applications. I found it so interesting and useful because lately many of my brushes are just not making the grade.Thanks again and keep on posting. Best site ever.

Thank you so much, Denise! 🙂

When I looked for a brush for cream shadow, the Mac SA handed me Mac 239. It worked like a charm. That goat hair is a work horse.

Oh, nice to hear that!

This was really interesting for me to read because I never use brushes for cream eyeshadows! Most of my eyeshadows are powder, and the few cream eyeshadows I do have I just have always used my finger. I do sometimes use the Elf C brush though. I really want the UD finger brush!

How do you normally wear/use your cream eyeshadows? I normally wear three or four at once, so that might be why 😉

I actually haven’t done much eyeshadow blending with the UD Finger Brush. I have used it once or twice with cream shadows and I’ve been wanting to try it that way more but I mainly use it for really diffusing harsh lines in my nose contour between the highlight and blending cream highlighter down the nose. It’s a brush that is different from most of what I have so that is one of the reasons I really like it. I’ve used my UD brushes so much the numbers wore off mostly but they should have printed the writing on to them with something more visible. I love hearing your favorite brush choices Christine!

Definitely give it a try for more! The Finger Brush is very cool. I haven’t seen the numbers wear off yet that I’ve spotted, but I will keep an eye on that and make sure to pay attention to it!

My favorite brushes are my favorite, regardless of the type of product. I would still use the Morphe G17, MAC 217, and Real Techniques Base Shadow for creams. I find the 217 works great with MAC paint pots. ColourPop Shadows I just use my finger- I hate using brushes with those.

Oh but I was wrong! Real Techniques Deluxe Crease brush. Dense and dome shaped, great for creams as it can really move them around. I never use it for powders because it’s too dense.

Ah, I find I totally reach for different brushes depending on the type of product myself 🙂 Glad you have your go-tos!

Christine, thank you so much for these incredibly informative posts.

I am a regular cream shadow wearer and tend to use a MAC 242 or Bobbi Brown Cream Shadow brush. I’ve recently been experimenting with a MAC 217 and the discontinued WG 18, the latter of which applies cream shadows beautifully.

I’ll be looking into your recommendations and those suggested in the comments!

I’ll have to give the Wayne Goss 18 (discontinued) a try with cream eyeshadows. I definitely have a tendency to reach for the 242 often for cream eyeshadows (just the right width).

Your experience (what with testing and using thousands of eyeshadows) is invaluable. Thanks for the wonderful breakdown of brushes you use, and even specifically pointing out how the shadows are picked up/applied with the type of brushes, bristles, and shapes.

Happy I could help, Tina! 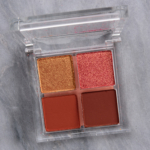 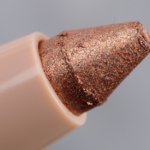 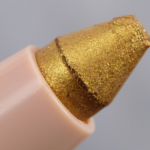 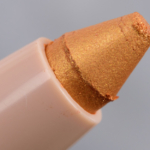 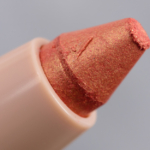 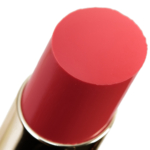