Rare Beauty Nearly Rose Stay Vulnerable Melting Cream Blush ($21.00 for 0.17 oz.) is a vibrant, fuchsia pink with moderate, cooler undertones and a satin finish. It was dewier, more emollient, and felt like a thin, traditional cream blush when initially picked up (with fingertips or a brush) from the pan, but it turned to a more powder-like formula when it came into contact with skin, so the dry down was quick and working time was just as quick. I’d recommend working one cheek at a time and working quickly to apply and diffuse.

Once applied, it stayed in place well and showed a bit of fading after eight hours but no sliding/migrating. It had semi-sheer coverage when applied to bare skin, which was easy to diffuse to sheerer coverage–the formula itself was more prone to sheering out than being built up (which required actual layers of product), which was as marketed. While it was described as a formula one could layer, I found the first layer was more prone to lifting and getting pushed around–creating an uneven result–if I tried to build up color much. The best luck I had was gently dabbing color right on the apple, often where I needed a little extra coverage, and just barely diffusing it out.

Because of the sheerer color, it was easier to work with, but the formula itself wasn’t the most forgiving formula I’ve come across as I felt like I had to get it right quickly and the first time because it wasn’t something I could fuss with later on without causing more unevenness. I did find that most of the time, I could get it right on the first try, particularly when layered over bare skin or a lighter coverage foundation, so I wouldn’t say it was hard to use overall.

The formula is supposed to be a "liquid-like cream" that "melts" on skin for a "second skin" look with a "wash of soft-focus color" that is "water-resistant" and has a "satin finish." It did seem water-resistant when I tested it on the back of my hand and certainly didn't move readily after it had been blended out and dried down.

The texture was thin, emollient, and more like a traditional cream in the pan and when initially picked up on a fingertip or a brush, but it was quick to dry down and turn to a more powder-like finish that was satin-like--not totally matte but not dewy at all--when it came into contact with skin. For this reason, a stippling brush was a little easier to work with and more forgiving than a fingertip.

The pigmentation was as marketed; it was sheer to semi-sheer with some ability to build up coverage, but the more silicone-heavy formula was better with one or two layers than more heavily built up as it had a tendency to pill and lift when fussed with too much. I don't know that I'd consider it to be an effortless formula, but once you figure out the best technique, the results themselves, as the coverage is sheerer, are more foolproof.

The formula worked better on bare skin and lighter coverage foundations that were more matte to natural but not overly dewy/luminous. The formula was blendable, but if I didn't get a decent blend quickly, it was harder to correct on its own; it was easier to blend out the edges using my foundation brush (and whatever was leftover on it) to soften any unblended edges. They lasted between seven and eight hours on me before fading visibly. 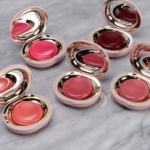 That vivid fuchsia tone is what dreams are made of! Just such a pretty tone. Not one I could very easily pull off now, but I sure did during my 20’s and 30’s.

This is so pretty. I got her liquid shadow in the same colour, but I have so many good cream blushes right now, in palette and individual that it’s an easy pass.