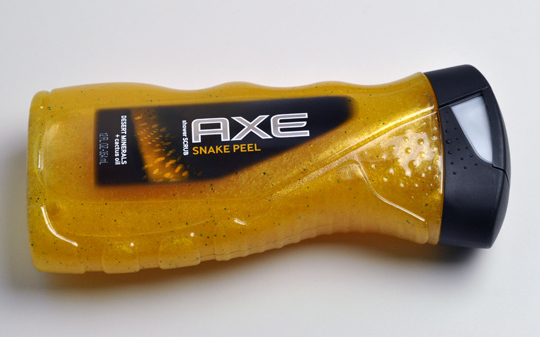 Shaun, aka The Tech Guy, aka my boyfriend, is here with another must-read “manly” review. He’s twenty-seven with normal-to-dry skin and suffers from no more acne (much to my envy!). Can you tell he’s on an AXE kick? ‘Cause I think he maybe raided the entire shelf…

Shaun enjoys long walks on the beach, vegging out on the couch watching chick flicks, and cuddling with Mellan. Or maybe not! He handles all the behind-the-scenes action here at Temptalia, from tech support to server woes to being my shoulder to cry on.

Here marks the end of our tour of AXE products (hopefully). We’ll finish off with AXE Snake Peel Shower Scrub ($5.49). I guess what they were going for is some sort of body exfoliator, but they did not accomplish their goal. Instead of exfoliation, it feels like you’ve been to the beach and are trying to get the sand off. I assume that’s what they mean by “desert minerals,” because, once again, the ingredient list reads like Egyptian hieroglyphics. Three wavy lines means water!

AXE seems to continually mold things to be gripped in the most awkwardly way possible.  Instead of the man grip of doom, they mold the bottle in a way that no mortal man could squeeze. I guess it should be called the Zeus grip, because only Zeus would be able to squeeze out any product based on the grip AXE wants you to use. Look at that, this review is turning into an Egyptian and Greek history lesson.

Smell-wise… Generic man-smell… I wonder where these smells are thought up, because every one of them smells practically identical. After heavy usage of this product, it made Christine have a sneezing fit, so I guess if you are partial to repelling women away from you, then this might be for you. This product should be used by the likes of Brad Pitt and that guy who plays the lead in Twilight–Edward Von Vampiro or whatever his name is.

Recommendation: Useful if you’ve never used a real body exfoliant. Not that I’d know anything about that… *whistles* …. *runs* 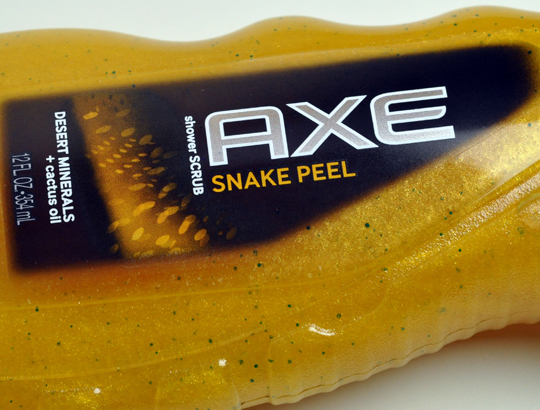 A great shower gel for guys is “B Electro” from Lush. Smells like grapefruit. It is however limited edition and no longer available online.

“For an even more MANLY effect, listen to this song while using SNAKE PEEL daily!” http://tinyurl.com/38yjwc7

LMAO, I just imagined that and died.

Ha Ha! axe is called lynx in the UK and Ireland for some reason! there is a thai mint flavour of the shower gel and it actually smells gorgeous! i always use it! but the body sprays are yuck! nothing worse than to be sitting on the bus and someone covered in it sits down beside you!

I agree, coding is definitely something complain worthy

Btw, in the ingredients it says…synthetic wax? That just sounds all sorts of…wrong. Yuck.

My SO uses this stuff sometimes, and its SO hard to get the little micro beads to wash all the way off! You could be out of the shower for hours and they still manage to show up around the hair line and behind ears. Axe good smellin body washes without the beads, which is wayyy more user friendly.

Hahah, my boyfriend had all the same things to say about this product. He used it once and then it sat in the bathroom floor for weeks before I finally just threw it away. No arguments from him, ha.

Hey can you do a deodorant review? My boy is looking for a new one so maybe I can help him out. I was thinking Old Spice, just cuz of the commercials.

Lol. TY for your reviews! My ex used that stuff religiously . . . I have a large aversion to it!

LMAO @ “…if you are partial to repelling women away from you, then this might be for you.”

And it’s OK, my SO snags my Bath and Body Works Orange Sapphire Exfoliating Shower Gel on a regular basis — he LOVES it. Maybe you should start reviewing products like that instead of the whole AXE line since they all smell the same and are bad in general. Maybe you could start with Orange Sapphire…? 🙂

LOL ! So true on the Zeus grip ! I wonder who they got to test squeeze these products before they got out.

Your reviews are so hilarious 😀

Great review! Ugh, some person who obviously doesn’t like me and my boyfriend together bought this for him and he repelled me for days. Luckily he’s using Old Spice now. Haha.

good job on the reviews. very straight forward and to the point. Any chance on doing old spice product reviews in the future?

Loving the review, hating the product!

Shaun, will you please start a Male Beauty Blog? I’d read it and I’d get my 9yo nephew to read it. He loves the Axe stuff and swears any day now he’ll turn into chocolate on the Subway.

Maybe a ‘swatch’ or a bit of the product on a white porcelain plate so we can get a look at the consistency? 😀

Stick to a brush when you shower; that way you can scrub without triggering your girlfriend’s allergies.

Poor Christine; you get her some Zyrtec now, ya hear? 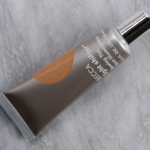 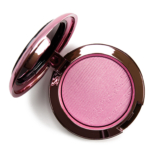 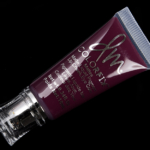 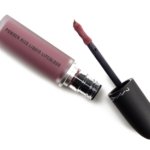 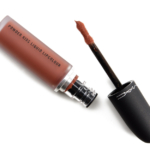